We can look back at a successful installation on the British Virgin Islands. As from this week, we have arrived at our headquarters in The Netherlands and have transferred the operational phase of the water maker to the end-user. Let’s shortly take a moment to look at what has happened since the launch of this project and what is about to happen, as it is all moving in a rapid pace.

After intensive weeks of construction, it has been a very rewarding experience to taste the water and being able to enjoy the use of our own elemental water for several weeks. The premises have changed from empty cisterns, short showers and dried out vegetation to a lusher environment where water usage is no longer an issue, it comes ‘natural’ now with 12,500 liters each day!

We have been making fresh water for over three weeks now, with a production of more than 300,000 liters of water and thereby already avoiding 1.5 tons of CO2 emissions. A local operator has been certified to operate the system through a half-a-day training and is now able to perform the limited maintenance tasks. Through our remote monitoring, we can view the production quantity and quality which has constantly met the design criteria. This has resulted in a well-regarded reference from our customer, which can now be read at the Projects-page.

The media attention which the launch of our project has caused was overwhelming. We have featured in several local newspapers, such as the article of the BVI Beacon and of the Virgin Islands Daily News, which can be read through the links. Also in The Netherlands we enjoyed much hard copy and digital publicity, from the Financial Times and The Financial Telegraph to the TV on RTL. Important global organizations such as Climate-KIC, OneWorld, TU Delft and the Dutch Water Sector have written a press release as well, which can also be read through the links. Also through Twitter the news was spread at a rapid pace, which enabled a large global outreach. As a result, we have received many requests and invitations, which we hope to be able to follow-up on as soon as possible.

The current extreme drought on the BVI has accentuated the requirement for an alternative water supply, preferable affordable and without contributing to other global challenges. The past weeks on the British Virgin Islands have allowed us to physically show the installation to a large range of possible customers, which have gotten the opportunity to really experience the ingenuity. Plant operators were astonished by the lack of noise from the desalination skid and the lack of scheduled maintenance by automation. The remote monitoring option and opportunity to include ‘warning’ text messages if an extreme event occurs was a relief to many of the Outer Islands hotel managers. The simplicity and thereby reliability of the operations were a pleasing message to all visitors. The cistern deck has become the favorite view point of the tour and has thereby shown its value as asset, in the future most likely being used by the client as cottage foundation.

Through these positive reactions and the request for several projects on the British Virgin Islands, we will be busy writing proposals for the coming weeks and should be back on the BVI soon. 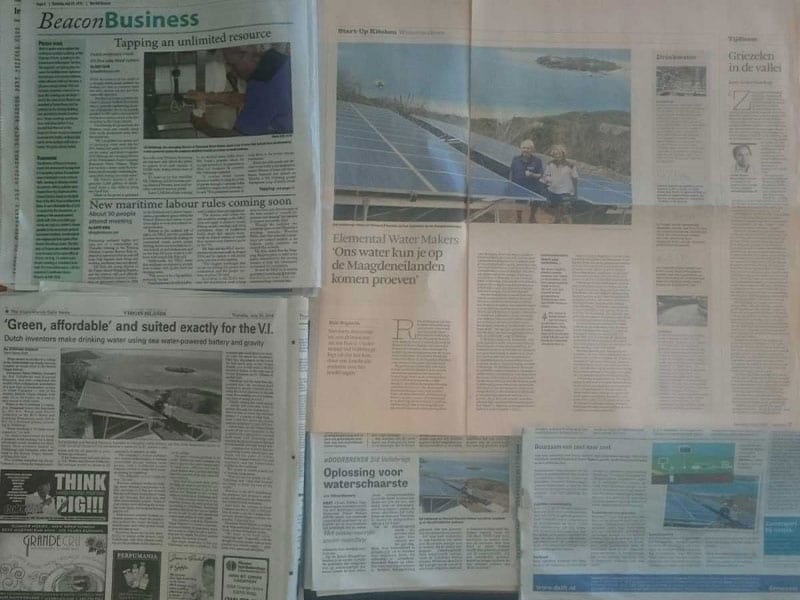 Why is clean water now more important than ever?

Water crisis in top 5 of severity of impact.